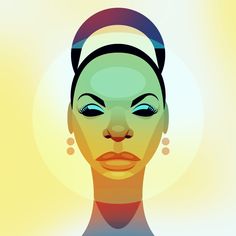 Netflix is now streaming an informative if straightforward documentary of the life of Nina Simone called What Happened, Miss Simone? (an unfortunate borrowing from a Maya Angelou poem). The documentary depicts Simone as the rare artist not in love with her art, indeed at war with her art, with her instrument, with her audience, and with her nation, for whom the stage was a servitude thrust upon her by the well-meaning white women who arranged her first piano lessons in Tryon, NC, by her husband, by perpetual economic necessity. What should have been her salvation became a metaphor for the slavery of black people generally. Manic depression and bipolar disorder were the clinical causes of her distress, and yet one thinks of Yeats’ poem “The Choice”:

The intellect of man is forced to choose
perfection of the life, or of the work,
And if it take the second must refuse
A heavenly mansion, raging in the dark.  […]

Simone’s problem was not rage in the dark—the intrinsic artistic condition, according to Yeats—but denial of her own “choice.” She conceived herself not as an artist raging in the dark but as a prisoner raging at the dark. And yet the dark was fecund. She never betrayed her art or slackened in service to it. She invested every snatch of melody with her genius for phrasing. Briefly trained at Juilliard, Simone was probably the finest female pianist in the history of American popular music. Her “Rosebud” was the frustrated desire to be “the first black classical pianist in America.” She appeared at Carnegie Hall in April 1963, but the experience was bittersweet; she was there for the wrong reason, playing the wrong music.

At the 1960 Newport Jazz Festival, Bach intersected with Cole Porter.

The quintessential Nina Simone song is her desolate, haunted version of “Strange Fruit,” a protest song that assumes frightening personal dimension and becomes a vessel for Simone’s utter bleakness of mind. She had finally found a metaphor for her own strange crucifixion. Simone herself was the strange fruit.

I’m partial to the live albums Nina Simone at Newport (1959) and Nina at the Village Gate (1960), but my favorite album is Little Girl Blue (1958), one of the most masterful of all debut albums. It’s by turns jazzy, bluesy, and aggressively pianistic in its stretched, eccentric interpretations. What’s more, the cover transfixes me: Simone’s burning glance seems to cut through the soft-focus pastels of an entire musical era in the process of subtly putting it to death.